Home > Blog > All About Jerry Cans

All About Jerry Cans 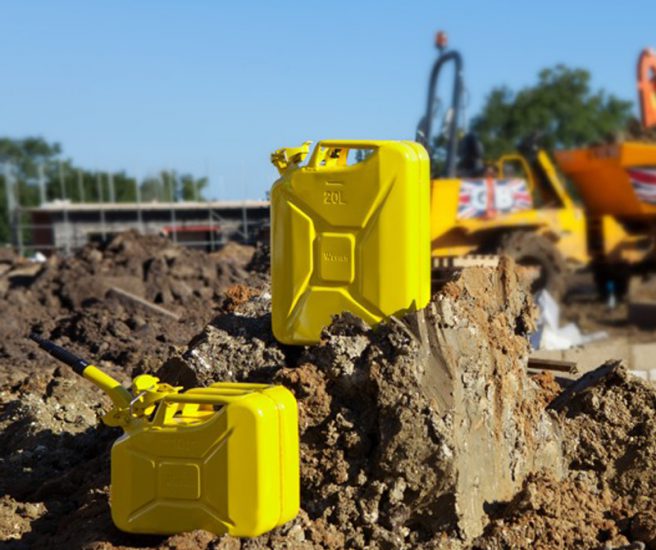 As its name suggests, the jerry can was issued to German forces during World War 2, where it was known as the Wehrmachtskanister. It was christened the jerry can by allied troops who rapidly assimilated captured examples into their own units, realising it was a far superior design to their standard issue fuel cans.

The British counterpart at the start of the war resembled a large rectangular biscuit tin; it was unwieldy, with a single slim metal handle, and required a separate spanner, funnel and spout, all of which could be easily lost in the field. On top of this it was constructed from welded sections of mild steel plate and had a tendency to leak at the seams. The Jerry can on the other hand was robust and hardwearing , with a number of innovative design features.

Firstly, with a 20 litre capacity it could hold more than the allied designs, yet was easier to hold and carry thanks to its slender profile and distinctive three part handle. Consisting of three large parallel tubular sections, this enabled the can to be gripped in a variety of ways and made it possible to carry two cans in one hand if necessary. Additionally, they could be rapidly passed down a line, with the successive person grabbing a free handle before passing it on. The handles acted as protection for the spout, and provided a sturdy securing point for straps or rope. Additionally, if filled according to specifications, an air pocket around the handle helped with flow efficiency thanks to a breathing tube integrated into the spout. The air pocket also prevented the can from sinking if dropped into water.

The jerry can was also a much more self sufficient design. The spout had an integrated cap which could be opened and securely closed, forming an effective seal without need for additional tools, and thanks to its angled protuberance, it was easy to pour direct from the can, dispensing with the need for a funnel. The only standard accessory supplied with the Wehrmachtskanister was a length of rubber hose, used for siphoning fuel. Jerry cans could also be used for transporting drinking water as they utilized the same type of interior lining found in beer barrels, meaning the standard issue can could be used to fulfil a number of supply roles.

Thirdly, it was extremely durable and reliable. Constructed from two interlocking pieces of stamped steel which were welded together and sealed with plastic, the jerry can did not suffer from the leaks that hampered allied logistical operations. It also had large, broadly X shaped indentations stamped into the steel – although on first glance this might be assumed to be an aesthetic design flourish, it was actually an ingenious structural feature that allowed the can to accommodate for expansion or contraction caused by fluctuations of temperature. The advantages of this design were quickly realized by troops fighting in Africa, where British fuel cans often swelled up in the heat and burst at the seams.

The jerry can had been an integral component of the German Blitzkrieg tactics which enabled them to move motorised divisions rapidly through Europe at the start of the war. By the time of the allied invasion, the design had been reverse engineered and British and American troops were equipped with their own jerry cans. It remains a staple piece of equipment amongst military forces to this day.

It is a testament to the original design that nearly 100 years after its conception, the jerry can is still a much replicated and in demand container for hazardous and non hazardous liquids; for many people around the world it is an essential everyday tool for transporting drinking water, however in the UK they are more commonly used for transporting fuel, especially for powering outdoor machinery such as garden power tools and generators. In order to differentiate between the various substances that can be stored in jerry cans, including water, petrol, diesel and kerosene, they are often available in a range of colours for quick identification purposes. Jerry cans are also available in a range of sizes; however, it is important to note that in the UK there are restrictions to how much fuel you can legally store in them.

As per the Petroleum Spirit (Motor Vehicles etc.) Regulations of 1929 & the Petroleum Spirit (Plastic Containers) Regulations of 1982, metal jerry cans above 10 litre capacity may not be used to store fuel, though two separate 10 litre containers are permissible. Fuel must never be stored inside the home and the container should be marked as flammable to identify its contents. For extra secure storage, look for explosion safe jerry cans, such as those from the Sirius range. These have an internal honeycomb structure which is designed to disperse heat build up and prevent hot spots from occurring, and are manufactured to comply with a number of international safety regulations.

There are a small number of accessories available for jerry cans which are designed to make them easier to use and transport. These include flexible and rigid pouring spouts, for precision pouring, and holders which enable them to be mounted on to a vehicle for secure transport.

3 thoughts on “All About Jerry Cans”