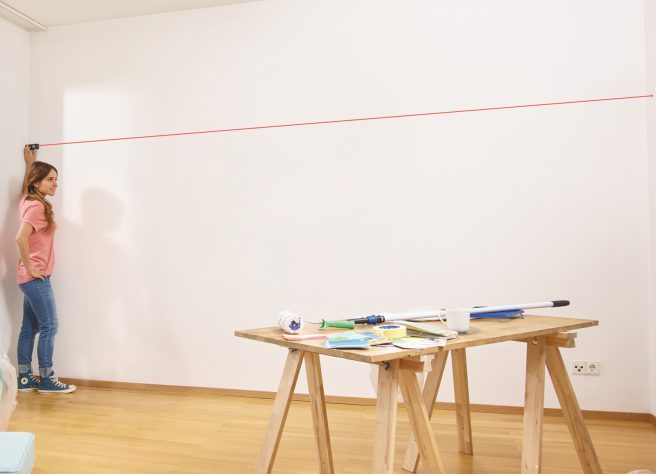 Have you entertained the notion of getting a laser distance measure in the past but decided you wouldn’t get enough use out of it to justify the expense? Then you may be interested in the Bosch Zamo III, a compact laser measuring tool which can be used for a wider variety of jobs thanks to a range of accessories which are either available for purchase separately, or included as part of a complete set.

Perhaps you’ve never entertained the notion of getting a laser distance measure, or perhaps you’ve never heard of a laser distance measure (also commonly known as a laser rangefinder). So what are their key advantages? As is fairly obvious from the name, they are designed for measuring distances and they do this by projecting a laser beam. As soon as the beam hits a solid object it is reflected back at the tool which automatically calculates the distance and displays the value on a screen. In other words they function a bit like electronic tape measures, though there are some pros and cons to weigh up between the two which will be summarized below.

Advantages of a Laser Distance Measure

One of the biggest advantages of a laser measure is the speed with which it enables you to map out an area. Estate agents love them because they can whip round a whole property and get it sized up in a fraction of the time it would take with a tape measure.

With a laser measure you can do all of your measuring single-handed – there’s no need to get your buddy to hold on to the end while you walk to the other side of the room – simply point and click.

Laser measures only need a line of sight to the target area, making them ideal for measuring in awkward locations – for example if you are working at height or in an especially cramped or crowded space. The laser line can make it through the smallest of gaps and won’t buckle under its own weight like an overextended measuring tape.

Most laser measures also give you a few added luxuries such as the ability to store measurements in onboard memory or calculate an area in square metres at the press of a button. In some cases you’ll be able to transfer this data over USB, enabling you to to keep it for your records or email it off to a third party – for example to a contractor who is doing some work on your property.

Disadvantages of a Laser Measure

Although we tend to associate lasers with pinpoint precision, laser measures at their current stage of development (especially at the DIY end of the market) are rarely recommended for critical applications. That’s not to say they’re wildly inaccurate- the Bosch Zamo for instance is rated at +/- 3.0mm, so as long as you’re not doing fine carpentry or working to engineering tolerances it shouldn’t be much of an issue.

Perhaps the biggest shortcoming of a standard laser measure is that it can only calculate the distance to a solid object. For instance, if you place it at one end of a plank of wood, you can’t work out how far away the other end is unless you butt a solid object up against it.

While you can pick up a perfectly serviceable tape measure for about the same price as a cup of coffee, laser technology commands a significantly higher price point, and the disparity between the two means that unless you are in a position where you really need one, a laser measure can seem like a bit of an extravagance.

That’s the Pros & Cons out of the way but as we mentioned before, the Bosch Zamo III has a few tricks up it’s sleeve, so how does it stack up against the competition? Packaged in a compact rectangular housing, it is powered by standard AAA batteries and has a measuring range of between 0.15 and 20.0 metres (by comparison, the most common builders tape measure is the 5 metre model, and they rarely go above 10 metres). As mentioned previously, it is accurate to within +/- 3.0mm, and measurement typically takes 0.5 seconds (up to a maximum of 4 seconds). It has a simple, easy to use interface which only really features one big button. Double clicking this button enables an area to be calculated, and the screen displays measurements clearly in white characters over a black background. Like most Bosch tools, it has a fairly minimal, streamlined design,  but what really sets it apart from the competition is the ability to connect additional accessories to increase its versatility.

Currently this accessory lineup consists of line, wheel and tape measure attachments, and each one is simply clicked into place on the end of the Zamo to enable these different functions. Let’s take a closer look at them.

The line accessory turns the Zamo into a laser line level, e.g for hanging pictures. It projects a horizontal or vertical laser line which can be easily seen on indoor surfaces, and means you don’t have to try and hold a spirit level with one hand while working. This is especially useful when working in a larger area, for example if you want to mount several picture frames along a wall and install them all at the same level. The laser line provides a clear reference point without marking the wall and leaves your hands free to keep frustration to a minimum. Once you have finished, simply unclip the line adaptor and the Zamo can be used for measuring as normal.

The wheel adaptor provides you with a handy way of taking measurements along solid surfaces without needing something to point a laser at. Simply roll the wheel adaptor along the surface, and it will calculate the distance it has travelled as it goes. It works a bit like a surveyors measuring wheel, only on a much smaller scale. However, its maximum range of 20 metres means that most DIY measurement tasks will be well within its capabilities.

Like the wheel adaptor, the tape adaptor doesn’t need something to point a laser at, but instead it functions like a miniature tape measure: simply pull the tape out and the screen on the Zamo displays the distance. Suitable for distances of up to 1.5 metres, it doesn’t have the range of the wheel but is much faster to use and ideal for taking quick measurements or for working out spacing between objects. The tape is also flexible and can be used for measuring circumferences as well as straight distances.

All of these accessories are fairly affordable – when purchased individually they are cheaper than many tape measures for example. You can purchase the Zamo III as a complete kit with all three included, or purchase the bare tool and obtain them separately if you require them.

Neatly, the Bosch Zamo III gets around two of the main disadvantages DIYers may identify with standard laser measures – the ability to connect additional accessories means that not only do you get a lot more for your money, but you can also accomplish measuring tasks that would be beyond the capabilities of alternatives on the market. All of which means the Zamo should prove useful for a wide range of jobs around the home.

The Bosch Zamo III is available now and can be viewed here.