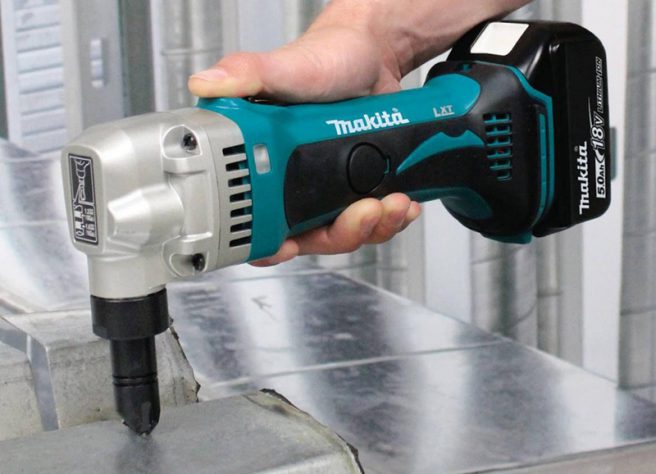 Nibblers and shears are two of the most common power tools available for cutting sheet metal, providing a faster and less fatiguing alternative to hand tools. However, many inexperienced users are often confused as to the difference between them and the advantages they confer (incidentally both terms – nibblers and shears – can refer to types of hand tools as well, which adds to the confusion slightly). In our Nibblers vs Shears guide we will give a quick breakdown of each tool and some of the applications they might be preferred for.

An easy way to remember how a nibbler works is to imagine it as a sort of motorized metal chewing rodent. It literally nibbles its way through the sheet metal at high speed, spraying out small semicircular chips as it is guided through the workpiece. It does this using a punch & die assembly at the business end of the tool, which eventually becomes worn and needs replacing.

Much like the chewing action of a small rodent, the nibbler destroys the material in its path, meaning it is not suitable for cutting extremely fine lines like hand shears or snips would; however, the surrounding metal remains undistorted (though it may need to be cleaned up to remove any traces of machining and sharp edges). The fact that it removes material as it cuts through it can be advantageous when cutting small channels or cutouts, something that would often be much more tedious with alternative methods. For the same reason nibblers are sometimes used by sculptors and creative metalworkers to cut patterns out of sheet metal. Bolstering their prowess in this field further, nibblers can also negotiate tight curves easily, meaning an experienced operator can wield them with a considerable amount of control, much like a jigsaw, when cutting more intricate shapes. Cutting straight lines is easily achieved by running the nibbler along a straight edge, and cutouts in the centre of a sheet are simply started off with a drilled hole.

Another job that is perfectly suited to nibblers is cutting corrugated sheet metal. The elongated die assembly juts out at a 90 degree angle to the motor housing and means the tool is able to ride the peaks and troughs without becoming stuck or jamming. In cases where this is not possible due to the body of the tool contacting the metal, most nibblers provide a facility for the cutter to be swiveled; this then enables the operator to hold the tool at a right angle to the workpiece and advance along the material sideways, as can be seen in the image above.

So far so good. The major bugbear many users have with nibblers however, is the waste material they create. The average nibbling application will produce thousands of tiny chips, and if due care is not taken to contain them, they can get absolutely everywhere. These chips are sharp enough to cause injuries and will often make scratches in flooring and any other surfaces they come into contact with. On top of that they can enter machines and electrical systems with the potential to cause short circuits and foreign object damage. So good preparation is key to using a nibbler: as well as ensuring the chips are kept contained in the work area wherever feasible, many users make use of tools like magnets and magnetic rollers to try and keep their workspace clean.

Power shears for sheet metal come in two main variants: single cutting types, which look fairly similar to nibblers, and double cutting types which commonly resemble a drill or reciprocating saw with a strange metal contraption bolted onto the end.

The action of a single cut shear is essentially the same as a pair of scissors (or shears, for that matter). As the machine is advanced through the material a sharpened moveable blade rapidly cuts against a fixed, or anvil, blade, with the metal in between. This slices cleanly through the sheet metal without creating any waste material, though it will usually distort (ie warp or bend) the material to some degree as it cuts through it. For this reason they are not usually the first choice if the metal needs to be kept flat, or is being used for an application with specific tolerances. Single cut shears can cut curves but usually require a wider turning circle than nibblers, and if pushed beyond their capabilities they will leave a jagged and distorted edge.

One of the primary advantages of single cut shears is their cut capacity. They are usually capable of more heavy duty cutting tasks than either double cut shears or nibblers; for example, the Makita JS3201 offers a max cut of 3.2mm in mild steel, more than double the rated capacity of most tools in the other two camps.

Double cut shears are so called because they use two separate cutters which remove a thin strip of material as the tool is advanced through the material. In this respect they leave a wider kerf, like nibblers, but are much easier to clean up after. They also cut with minimum distortion, as long as they are kept fairly straight; double cut shears do not excel at curved cuts, and are not suitable for heavier duty applications like single cut shears. However for many applications in light gauge sheet metals, they provide a quick, easy way of producing a clean cut that preserves the shape and structure of the metal without creating excess waste.

Of course power shears and nibblers are not the be all & end all of cutting sheet metal. As well as their namesakes in the hand tool world which offer a more labour intensive (but much cheaper) method of accomplishing this task, there are a few other tools which are routinely pressed into service for sheet metal work. These include angle grinders with metal cutting discs, jigsaws with metal cutting blades, plasma cutters and dedicated metal cutting circular saws. And you’re not just limited to electrical power: pneumatic nibblers and shears represent a popular choice for garages and body repair shops. So no matter what the application, there’s a good chance you’ll be able to find the ideal solution to complete the job.

What is your go-to tool for sheet metal work? Let us know in the comments below.

How To Drill Tiles