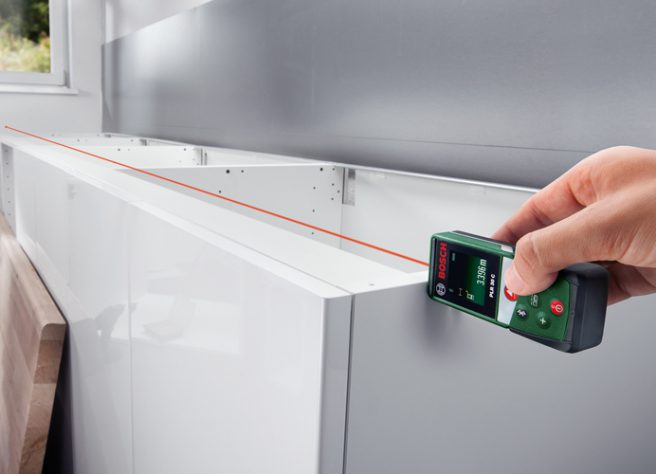 If you have gone through the ordeal of selling your house in recent years, the Estate Agent may well have measured the rooms with a small electronic box of tricks instead of the expected traditional tape measure.  They would have been using one of two things; an Ultrasonic or a Laser distance measurer.  These are highly useful pieces of kit for quickly measuring rooms or distances and many have the additional function of calculating areas and volumes.  For many trades, they are invaluable tools for quickly and accurately working out areas, for example for floor coverings or paint or any number of materials.

So, how do they work?

There are two different types available on the market.  Firstly the Ultrasonic distance measurer uses a sound beam to bounce off of the opposite wall or item to give the distance from the tool.  Some have a laser point so that the user can see where the signal is bouncing off.  Examples of these are the Stanley Intellimeasure 77-018 or Draper DMSD Ultrasonic Distance Measurer & Stud Detector.  Ultrasonic measurers are slightly cheaper than the alternative laser units, starting at £30-40 but they are not considered as accurate in use and should possibly be described as estimators.

Lasers measurers work (as suggested by the name) by bouncing a laser beam off of the wall or item that is being measured.  This has some major advantages, firstly in that it provides more accurate data as it is easier to physically see where the measurer is actually sighted by the position of the laser dot.  Also, a laser is more accurate than the alternative sound beam, so the measurements are again of a higher accuracy.  Laser measurers also tend to have more functions, so they can combine many measurements and make complicated calculations etc, depending on the model.  Although they are primarily designed for indoor use, they can also be used outside, but you may encounter problems in bright sunlight.  Using laser glasses to see the dot will aid you. The Stabila LD520 Distance Laser Measurer has a built in camera with 4 x zoom function so that exact measurements can be taken even when the laser is not visibile.

Many distance measurers work in Metric and Imperial but be sure to check the individual model you are interested in as some only work in Metric.  The more expensive the model, the greater the distance they will measure and the more functions they will have.  We know that once you have one of these in your tool kit, you’ll wonder how you ever managed without it.

Go ahead and browse our range of distance measurers, which includes laser and ultrasonic options suitable for both professional and DIY applications and if you have any questions please do get in touch and we will do our best to advise you further.